While most of my blog focuses on the benefits of simulation within medical education, I’m always keen to read about the opinions of others. In a concise and well written article in the Atlantic by Dr. Richard Gunderman. While he acknowledges the pitfalls of lectures, he raises some excellent points regarding their value. Just like most things, absolutist statements (like all lectures are bad and provide no learning) are likely wrong. He argues that

The great lecture opens learners’ eyes to new questions, connections, and perspectives that they have not considered before, illuminating new possibilities for how to work and live.

I still recall some of my favorite learning moments in medical school and many occurred during lectures. Some of my most memorable professors were memorable because they lectured in a way that was captivating and inspiring. While I do strongly advocate against lectures (in general) because I believe we have superior methods for education, they should not be eliminated. We need to harness the skills of those lecturers to whom we could listen all day and impress that upon learners. Learners can then be encouraged to become great lecturers or they will become so inspired by a topic that they wish to become an expert that leads to great change. I’ll end with this quote from the article. It highlights the value of lectures often beyond our typical perceptions.

The real purpose of a lecture is to show the mind and heart of the lecturer at work, and to engage the minds and hearts of learners

Last week we ran another case-based learning session. The session consisted of a short discussion based around a case that we were tasked that involved a patient with a suspected pneumothorax.

We discussed the issues and challenges of managing a patient on the ground and in-flight with a pneumothorax. In addition, we discussed then practiced how we can use ultrasound as an added tool in the diagnosis of a pneumothorax in the prehospital setting.

To briefly summarize, I’ve divided up some discussion points

Posted some pics of our most recent adventure in Bay of Islands.

The most recent simulation session I ran at ARHT. We’ve been quite successful with great participation from our crew. Awesome day!

This week we ran an in-situ simulation with our duty crew (crewman, paramedic and doctor). We had great participation in a challenging scenario of massive hemorrhage in a blunt trauma patient.

As our simulation experience continues to grow we are always trialling new things. This past week we integrated several techniques that helped enhance the scenarios fidelity.

The scenario was a patient who had fallen off his motorbike at highspeed. There was a paramedic already on scene when our team arrived. The patient was in shock: BP 95/60, 130bpm, RR 28, 87% on room air, GCS 15.

Here’s a brief outline of what we did and why!

This video was posted about 6 years ago among some of the early TED talks but I’ve found it quite interesting and thought I would re-post it.

I’m a little behind in the blog postings. But here’s some pics from our recent trip to Matakana. I’m writing this while we’re up north in Bay of Islands and we hope to have some even more beautiful pics posted soon!

I have written about checklists in medicine before, but in light of a recent publication in the New England Journal of Medicine, I was inspired again to write about it.

One of the leading advocates for checklists in medicine is Atul Gawande. His book “The Checklist Manifesto” is an excellent read for anyone interested in the topic and definitely well written for the lay-person. Notably he’s also the senior author on this randomized trial just published in NEJM. And while the NEJM is often busy publishing some questionably biased and often pharma-funded studies, this one deserves attention. But before I discuss more about the trial…I digress…

Just this week, while we were flying I observed something quite interesting. Typically when we fly in the helicopters, our pilots ask our crewman for landing checks. At which point the crewman will go through the checklist with the pilot answering appropriately. We were out on a job and the crewman was busy in the back of the machine so the pilot read the checklist himself. After each item on the list, the pilot would answer himself….basically talking to himself. I remember asking a pilot about the value of a checklist for both their critical and non-critical procedures. He told me that by doing a checklist, he could concentrate on the variables that may arise and not worry about forgetting something small or routine. This is interesting…

I can’t remember the last time I’ve seen a physician read off a checklist, answering to themselves that all everything required is present and functional.  In medicine, we have this idea that if we can’t remember everything then it’s a sign of weakness. We don’t use checklists. In our minds “checklists are for losers” (not sure who I’m quoting here). But this idea that we must remember everything during a critical event is unique to medicine. Obviously I’m not advocating that we shouldn’t commit anything to memory but why bother trying to remember mundane items when we should be concentrating on “owning the resuscitation” (A term coined by Cliff Reid from resus.me).

We should instead focus on identifying why the patient is crashing or what might make this particular intubation difficult. We should NOT be trying to remember whether we’re missing anything… “ok…so I have the BVM, suction, tube…anything I’m missing? Of course! We need RSI drugs!”…this is a useless conversation and waste of time. By using a checklist the cue for RSI drugs will happen and the focus can be on more important things like ensuring the patient is well positioned, critically evaluating the cause for clinical deterioration – then the clinician can focus on real problem solving.

It’s interesting that many of the HEMS services out there are using RSI checklists and yet few are used in EDs around the world. At our HEMS service, we use it because we work in often hectic conditions that can be quickly become uncontrolled situations with unstable patients…wait a second…that sounds remarkably like an ED around the world! So why not implement a similar protocol? A recent paper in J Trauma looked at a standardized approach to RSI in trauma…seems promising!

And as I mentioned above, the NEJM recently published a large randomized trial evaluating the use of checklists for high-fidelity crisis simulation in an operating room setting. The use of checklists resulted in a 75% reduction to adhere to critical steps in management. Most impressively, the difference in missing critical steps was 6% with checklists vs. 23% without checklists. That’s an absolute reduction of 17%! And a relative risk reduction after multivariate analysis of 28%. If there was ever a drug trial that showed similar results it would likely be put in the water (maybe fluoride?). But last time I checked, no one will be making much money by producing a checklist. And yet despite our inability to show much more than non-inferiority with new oral anti-coagulants (vs. warfarin), the increase in use is HUGE!

This figure below published in the article is impressive. It demonstrates how the same team behaved completely differently depending on the use of a checklist. Some of the instances where they failed to adhere to critical processes of care is unbelievable and certainly is NOT good for patient oriented outcomes! V.fib and no defib for 1.5min? WOW!

Prime example of how checklists can help during resuscitations! Published in NEJM

I agree that we should probably study the implementation of a checklist into emergency medicine…but we probably shouldn’t wait longer. Recent publications show adverse event rates (or near misses) of 10% during RSI in the ED. This is NOT acceptable. We can do better and we should do better. Time for checklists to become an integral part of our critical actions. We can assign the checklist to be administered by our resuscitation room safety officer (yes, another novel concept that also deserves consideration…check out Cliff Reid’s great blog post on the topic)

Or that psychology exam in first year university? Probably not.

This propensity to forget what we’re learning has carried through to medicine and it appears that our same study habits that we adopted early in our educational careers really don’t serve us well. Cramming doesn’t work. Well, it does to pass the test but as we move into a field where we need to remember things for more than just a day, we need to have ways to learn better. We need to adopt techniques and integrate within our curricula improved methods for trainees to retain knowledge. You could argue that memorizing is less important with any fact just a “google” keystroke away. I agree. But we still need to retain information as it makes us more efficient during clinical situations, in emergent situations we MUST remember and finally it makes it easier to teach others. 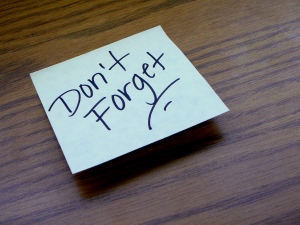 Wouldn’t you like a method to remember better, than just a few post-it notes?

Psychologists have been interested in these concepts for decades and several interesting ideas have emerged. “Spaced education” – the idea that educational encounters which are spaced over time and repeated result in improved and more efficient learning. Contrast this to everyone’s favorite “Bolus education” which is found at conferences when you sit down for a 1 hour lecture and you expect to actually remember something. Or sit in front of that textbook for hours before the exam then as soon as you walk out of the exam…surprise…you don’t remember a thing!

A study by a urologist published in 2007, randomized medical students to receive this “spaced education” endeavor. This occurred by regular emails with short clinically relevant questions/scenarios followed by MCQ and a summarized “take-home message”.  There were 4 core topics for the urology curriculum at this medical school and half of the participants received 2 topics by “spaced education” while the other participants received the other 2 topics by space education.

The results? Spaced educational emails significantly improved composite end of year tests. With greater benefit for those who received the emails over a longer period (6-12 months).

Another, similarly designed study found that this could be done with consultants and residents. There were statistically significant improvements across a range of topics when learning included a “spaced education” model followed by testing on a cyclical basis. Most importantly 84% of participants wanted to engage in additional programs!

Brilliant! I love this idea! This is a similar concept that is occurring now doing with Twitter and FOAMed (Free open access medical education). Though spaced education is more formalized and contains an evaluative piece. The concept is the same however…deliver short bits of information to the learner on a regular basis. This will improve retention and their ability to self-assess performance.

Educators can easily utilize Twitter or other forms of social media to deliver a regular stream of information to learners which then ideally integrates an evaluative component. This evaluation part is more than just finding out what the learner knows…it functions as an additional learning tool!