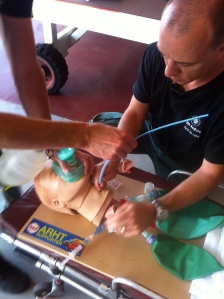 Newest addition to the ARHT simulation centre. Cricothyroidotomy task trainers built from old manikins. Rolled them out successfully last week with our paramedics using them for the first training session.

One of my medical education interests is looking at how we train and practice rarely performed procedures. For these situations, simulation offers an excellent method of training. The challenge, however, is recreating the fidelity of such situations since many rarely performed procedures are quite invasive.  Often we’ll start the training with a task-trainer like model and then progress to a full size manikin. Task-trainers are simulation models specifically designed for one type of procedure.

In emergency and pre-hospital medicine, the cricothyroidotomy is among the most invasive, time critical yet rarely performed procedures. In addition to the potential technical challenges of this procedure, the decision to perform a cric might be even more difficult.  Identifying a “can’t intubate, can’t ventilate” scenario and then to “pull the trigger” may be one of the hardest cognitive leaps we face in resuscitation.  For example, last week, in the  Auckland emergency department we ran an in-situ simulation scenario for the registrars that required the performance of a cricothyroidotomy. The goal of the simulation was only to perform a cric…in fact, we even gave the registrar team a heads up that the patient would required a cric. Amazingly while we only used a task trainer that didn’t even allow for intubation, the trainees still tried to proceed with intubation. There was considerable reluctance to finally acknowledge that it was a “can’t intubate, can’t ventilate” situation.  I don’t think we train enough to practice taking that cognitive leap to the final step in the failed airway algorithm. Even this short little scenario provided evidence that such scenarios require practice and should be simulated.

This past week at the base we rolled out our cricothyroidotomy task trainers. We constructed our trainers based on a model created by Agnes Ryzynski & Dr. Jordan Tarshis at Sunnybrook Health Sciences Centre. They described the creation of such task trainers using old/broken manikin heads and some innovation using easily found products within the hospital. The value of such a trainer extends beyond its simplicity as it also  maintains good fidelity, it costs less than $30 to make and it recycles old manikin heads!
Such a trainer might supplement an even lower fidelity construction depending on the setting. At the ARHT, our go-to method for cricothyroidotomy is a bougie-assisted technique which is described in this article and video. We’ve selected this technique based on simplicity in the field and relatively minimal equipment required. But there’s good debate out there whether these should be performed using the needle or surgical approach. Scott Orman (ED physician and blog author for aucklandhems.com) wrote about the topic last week with some great links.

You can see from the pictures, that the paramedics have set up on the left side of the patient. We were trying out different approaches and set ups to find out what works best. Personally, I prefer the right side of the patient. In our setting within the helicopter  we only have access to the patient’s right side. As a result, there may be some benefit to be on the right side. The ergonomics of such a high stakes procedure are probably understated so training in the same way that you’ll perform the procedure is essential. I acknowledge that you might need to be a bit flexible regarding setup but in general, the airway team should be well prepared and anticipate where equipment and personnel will be placed.

Here’s a few more pictures of our training day. 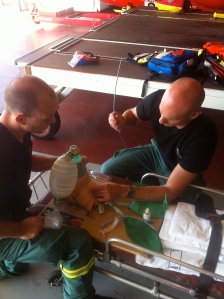 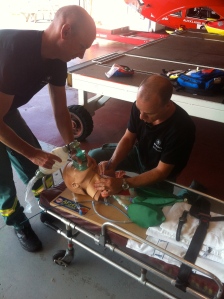 Next post will have a bit more about the evidence base around cric performance.